This workflow allows you to authorize a charge outside of NetSuite and later capture the charge when a NetSuite Invoice is created. This is helpful for companies that use an eCommerce platform to collect order and use NetSuite to manage fulfillment.

This workflow is a great fit if you use NetSuite for order fulfillment, A/R collection, and customer service (refunds, returns, etc); but leverage another system (Shopify, SalesForce, etc) for order collection and payment authorization. In this workflow, your eCommerce system authorizes charges in Stripe, and SuiteSync captures the authorized charge.

For example, if you are a retailer who wants to capture a charge once the order has shipped from your warehouse, this solution is a great fit.

Here's an overview of this workflow:

Here's a short video walkthrough of how this works:

Key benefits of this flow: 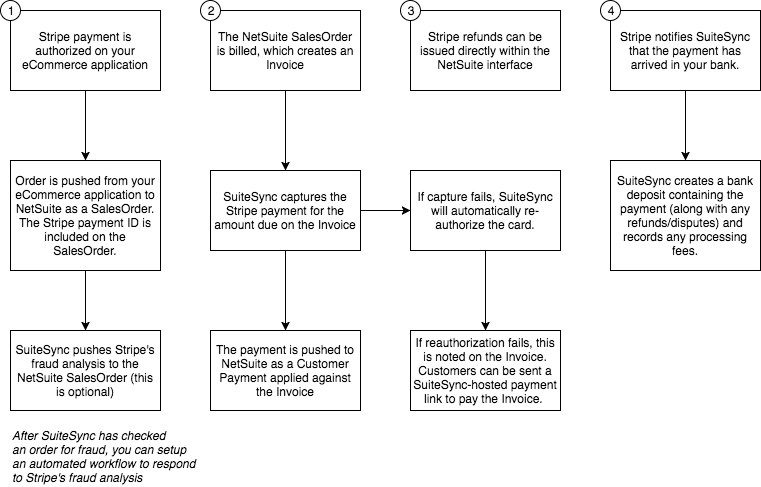 Your system is responsible for:

After the SalesOrder is billed, SuiteSync handles the rest of the process:

What is the Recommended NetSuite Order Workflow with Auth-capture?

NetSuite's order processing workflow is very powerful and allows you to customize the workflow depending on your business logic. For instance, shipments can have multiple stages, orders can be billed before they are shipped, etc.

Below is a recommended workflow for auth-capture based on the following assumptions:

Note that in most cases, anything that seems "manual" can be automated using a NetSuite workflow or SuiteScript.

To support this flow, you'll need to:

Here's instructions on how to enable these features.

Here's how to use auth-capture:

Can I partially capture a charge more than once?

No. Stripe only allows a charge to be captured once. Learn more about this.

Although multiple captures are not supported, if the card used for the charge was stored, SuiteSync creates a new charge for the second invoice if the original Stripe charge ID is specified on the subsequent invoices.

For instance, if you partially ship orders you'll often create multiple invoices for each partial shipment. After the first invoice is created, if each additional invoice contains the original Stripe Charge ID on the SalesOrder which was captured (which is the default behavior) then each subsequent invoice will trigger a new payment to be created in Stripe.

Can I use alternative payment methods (i.e. bank transfers) alongside an auth-capture workflow with cards?

Yes. You'll need to use CustomerDeposits for any non-card payments (only cards support auth-capture).

Not in the auth-capture flow. They represent a successful pre-payment. Since charges are not successful until they are captured, SuiteSync only creates a CustomerDeposit if the payment is authorized and captured during checkout.

Note that it is possible to use auth-capture in conjunction with the standard ecommerce workflow. If you want to use alternative payment methods (i.e. non-card methods like bank transfers) you'll need to use CustomerDeposits.

No. Only Invoices coupled with CustomerPayments are supported in the auth-capture workflow. This is a technical limitation: if more expanded APIs are released in the future that allow us to support CashSales, they will be supported.

To capture payment SuiteSync must:

Both Invoices and CashSales contain this information.

However, CashSales represent both an Invoice and a CustomerPayment in a single record. There is no A/R accounting entry made when a CashSale is created and an entry is made directly to cash.

Stripe Charges are not captured immediately when the CashSale created. Instead, a notification is sent to SuiteSync to capture the charge when the CashSale is created. Since the capture operation is run asynchronously and may not always succeed (if the charge expired, for example), creating a CashSale would incorrectly represent the reality in your Stripe account: an entry should not be made to undeposited funds until the charge is successfully captured in Stripe.

Can I capture less than the authorized amount?

Yes. The "amount due" of the invoice is captured. If the amount is less than the original authorization, then the charge is only partially captured and the rest of the authorization is released to the customer.

If the amount due is larger than the original authorization amount than a new charge is created for the higher amount due.

Yes. However, if you are using Stripe Orders the workflow is completely different. Learn more here.

I'd like to create an authorization for more than 7 days. What are my options?

Often customers want to authorize a card for an order that is fulfilled more than seven days in the future (pre-orders are a great example here). If you capture a charge when the order is fulfilled (in this case, after the 7 day window), the authorization would expire.

Stripe does not allow the 7 day authorization window to be extended. Your only option here is save the card and reauthorize it.

The key difference here is that it is important to setup your order workflow to only ship the order after the order has been paid in full.

Can I automatically release authorizations when an order is cancelled or closed?

Yes. This is an optional feature that can be enabled on your account.

Here is how it works:

How are failures handled?

However, there are some errors that cannot be recovered from automatically and require intervention on your end to resolve.

What conditions can I use to detect if capture has failed for a script or workflow?

Here are the conditions you can use to detect if capture has failed, and a reauthorization on a saved card (if applicable), failed as well:

Here are some other technical details to be aware of when developing auth-capture automation:

When a payment capture or reauthorization fails, you could send the user a link to a invoice payment form so they can pay their invoice. Here's some example code demonstrating how to detect if a payment has failed:

An authorized charge expires after 7 days. This authorization window cannot be changed.

If you create an Invoice in NetSuite after that 7-day period a new Stripe charge is created. The same card that was used for the original authorization is used for this new charge.

The new Stripe charge ID that is created is written to the "SuiteSync Authorization Code Field".

First, the authorized charge is deauthorized, releasing the funds back to the customer.

If a new charge was not successfully created, the old charge is not released. You can adjust the invoice by changing the invoice or total or applying a credit memo to the invoice in order to ensure the invoice total is less than the authorized amount. If you update the NetSuite invoice (by updating the memo or something else on the invoice) this will reprocess the invoice and cause the charge to be captured.

If an order is partially fulfilled, two ItemFulfillments are created, which creates two separate invoices. Stripe only allows a single capture against an authorized charge.

When the second invoice is created, a new charge must be created. This reauthorization process works identically to if the original charge authorization expired. The "SuiteSync Authorization Code" field will be overwritten with the new Stripe charge ID. A new charge is only created when the SalesOrder that the invoice is created from is the same SalesOrder that the invoice associated with the charge where the capture was initiated.

A note will be added to the memo indicating that a new charge was created.

In order to solve many of the above failure cases, a new charge needs to be created. The new charge uses the same card as the original charge.

However, this new charge is not guaranteed to succeed. Here are examples of a couple of instances where this charge could fail:

If these (or any other errors) occur when creating the new charge, a memo is added to the invoice indicating Stripe: payment error for customer cus_123.

Note that if the Stripe customer has additional cards that are saved, those cards are not used. Only the card used on the originally authorized charge is used.

In order to fix this issue, adjust the currency of the invoice connected to the charge.

If there is a Stripe or NetSuite outage, or if there are network errors the capture operation is retried. Retries are run every hour for the next 72 hours until it succeeds. If it fails after 72 attempts, you must manually retry the operation in the SuiteSync dashboard.